The KDDI CABLE INFINITY is equipped with PLOW-II. Its operating maximum depth is 1,500 meters,
and the maximum burial depth is 3 meters. PLOW-II is mainly used for the submarine cable installation. 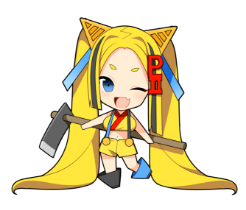 The cable burying machine, PLOW buries cables, repeaters and cable joint boxes in order to protect them from fishing equipment or anchors of large vessels.

This type of cable burying machine is called "PLOW(PLOUGH)",
since it digs a trench by the structure like a plow. 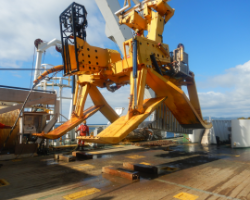 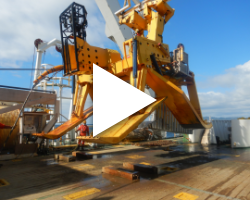 In the shallower water area than 1,500 meters, the submarine cables are, for protection from damages by fishing activities etc., laid and buried simultaneously by PLOW-II, which is towed by the mother vessel, and digs a trench of 1 to 3 meters on the seabed . The cable burial of maximum 3 meters is possible by the vertical plowshare and waterjet.

In case that PLOW-II is difficult to use due to a steep slope of the seabed, or because of the reburial of the cables, the self-propelled underwater robot, MARCAS-V or MARCAS-IV is used instead.

In June, 2008, PLOW-II was engaged in the cable burial in the shallow water section of RJCN submarine cable network which connects Japan and Russia .